BY: Nick (9) for Family Travel Explore

South Africa is a great country for birding because it has many national parks, game reserves and different habitats.

There are 850 species of birds recorded, 725 which are resident and 50 species that can only be found in South Africa. South Africa has 10 endangered bird species such as the wattled crane, the blue swallow and the bearded vulture. Bird parks can help educate people about bird conservation and help raise money for endangered species.

While I was in Johannesburg with my provincial chess team playing in the SAJCC under 10 years competition, I visited the Montecasino Bird Gardens with my dad, sister Leah and my uncle Derek who was visiting from Ireland. The Montecasino bird park has over 100 species of birds, and also has snakes, frogs and other small animals like iguanas, marmosets and tamarins. It also has a daily live bird show which includes birds of prey and educational talks which we were lucky enough to see.

We saw a variety of birds from Ground Hornbills to Cape Vultures, it was amazing! We saw a Jackal Buzzard fly around the whole arena and land next to one of the bird handlers. After that, we saw a crow that could put cans into a rubbish bin and a Pelican that could ski on the water.

Then, guess what happened to me?! The bird handler asked the arena a question, “what is a raptor?”, I quickly put my hand up, and answered: “A raptor is a bird that catches its prey with its talons”. I was

That live show was one of the best experiences of my life and if you ever get a chance to visit I would highly recommend it.

After the show, we spent a couple of hours walking around the rest of the park looking at the enclosures with other birds and animals. Some of my favorite birds I saw was the Toco Toucan from South American, the Blue Winged Kookaburra from Australia and the Pearl Spotted Owl from South Africa, and it is always good to see the national bird of South Africa, the Blue Crane.

To finish off an already amazing day we went to the arcade and ten pin bowling. It was definitely one of the best days of my life. 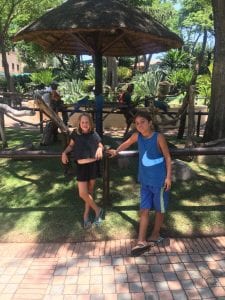 How To Stay Safe When Travelling With Children210 Total Shares
A Day At The Natural History Museum In London204 Total Shares
90 DAY USA FAMILY RV ROAD TRIP – WE DID IT!128 Total Shares
To The Ark Encounter, Kentucky – RV Road Trip USA59 Total Shares
One Day In Wilderness58 Total Shares